The "IT" in ITSM is irrelevant

This is probably not going to say anything new. You would  have to be living under a rock in this industry if you had not read, or at least heard of, Nicholas Carr's seminal article in the Harvard Business Review in May 2003 - IT Doesn't Matter, and probably a lot of what I will be saying here relates to the ideas he expounded in that article. If you haven't read Nicholas's article, you can find it here. 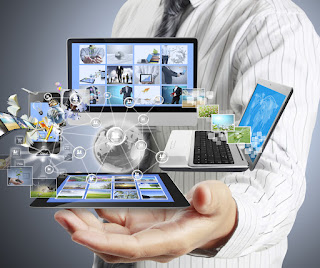 What got me thinking about this today was my decision to disconnect for the weekend. On Saturday morning I woke up and decided that I was going to have some "me" time for at least one day. Now I live a connected life, I read emails, check Facebook, check up on twitter activity, visit Linked-In forums, chat on a few non-business message boards....you get the picture. All these are available from multiple devices that I have either in my home, in my handbag or pocket. I knew that if I didn't force myself to disconnect, then I would get tied up in answering emails, reading and replying to tweets and Facebook posts and the book I was planning to read would remain unopened. So I took a deep breath and turned off mobile data on the iPad and phone (couldn't quite bring myself to turn them off completely!) and turned off the desktop. Have to say that, for a while, I felt a bit lost and alone!

Disconnecting today is probably harder, for me, than living without IT for a day would have been 20 years ago. Realistically all I would have had to do to accomplish that in 1992-93 would have been to switch of the shiny new 486 computer with the lightening fast 33Mhz processor and 4 whole megabytes of RAM! Pretty well everything in my house was reasonably technology free. Looking around the house today paints a very different picture. There is very little there that does not have some integral IT kit as part of its makeup. Family photos glide by on an LCD frame, my TIVO box learns what I like to watch and automatically records things that I might like (have to say it doesn't really know me very well though - some of the suggestions are way off the mark!), my bathroom scales, sometimes unkindly, remember what I weighed last time I was brave enough to climb on - they even tell me what my body fat percentage is and if my body contains enough water, my recipe books have taken up residence in a box in the attic - a stand for my iPad is all that I need, along with my Pinterest cooking board, I set the temperature I want for my shower or, if I really want to relax, how may litres I want to have in the bath...I use technology to streamline my life from the moment I get out of bed until I close my eyes at night (actually even then I push the button on my FitBit so I can see in the morning just how well I have slept!).

While I rely heavily on IT to enable my homelife, my worklife is close to 100% reliant on technology, and regardless of whether you work in what is regarded as "IT" yourself, whatever your job is, chances are that you are too.

New Zealand is a country that is very heavily reliant on primary industry - specifically the production of dairy products - for its economic survival. I am originally from the Waikato region, which is one of the key areas for dairy production, so I have spent a fair amount of time on dairy farms and in milking sheds over the years. In the 1970s, a farm that milked 100 cows would have needed at least a couple of people in the milking shed night and morning, for several hours to get the job done, putting cups on and judging when it was time to take them off again was time consuming and tedious. Some time later (and I can't remember the year) a dairy farming friend phone my husband to tell him that he had to come out at milking time to see what he had just installed in his shed, as a dairy farmer's son who had abandoned the farm life because he hated milking cows he was intrigued by what could make his friend so excited. What he saw was a piece of, fairly basic, technology that automatically "stripped" the cups once the milk had stopped flowing and allowed the to retract via a system of springs and elastic, out of the way of the cow. All that remained was to open the gates once all the cups in that row had been removed, and let the cows go on their way. That was a truly revolutionary improvement for the farmer of the day.

Fast forward to today, re-visit the same farmer and the management of his farm and herd is, to a very large extent, totally reliant on IT technology, and some of it pretty sophisticated. For a start every cow in his herd of around 500 Friesian cows is chipped. When they walk into the shed the chip is scanned, they step into the milking bale, the milking system senses where the teats are, sprays them to ensure they are clean and automatically puts the cups on. As the cow is being milked a record is kept of how much milk she supplies and what its percentage of milk fat solids is - woe betide the cow who does not keep pace with the rest of the herd, there is no hiding slack performance here! In years past, virtually every dairy farmer I know was hit with penalties for accidentally putting milk from a cow with penicillin into the vat...if he didn't pick up the mistake himself and dump ALL the milk from that milking, the dairy factory would detect it when it arrived at the factory, and that brings with it an instant, and pretty hefty, fine. But that is now, pretty well, a thing of the past, when the cow is scanned, if its records show that it has had penicillin, then it is drafted off to a holding area to be milked separately at the end of the main session. 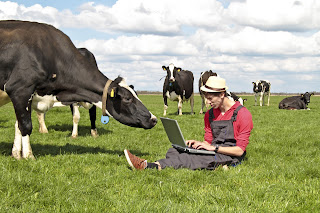 The use of IT does not end at the milking shed door. Recently this same farmer invested heavily in some even more sophisticated kit. Each cow in the herd now wears a device that keeps a track of their movement and, most importantly, alerts the farmer if the cow stops ruminating - chewing its cud - a typical dairy cow will chew its cud for around 8 hours a day, around 30,000 chews! If that stops it is a good sign that the cow is unwell. A good dairy cow is a pretty big investment, so keeping them healthy is critical.

The milk production records collected during milking are also used to feed into a program that calculates the supplementary feed requirements of the herd, how much and what formulation of grains, molasses and other goodies that need to be placed on the herd's feed pad each day. Another nice bit of technology that allows the farmer to stay in bed a little longer is the one that opens the gates automatically around 4am, sounds a bell to let the herd know that they can head up to the feed pad and have their breakfast before milking time. Milking 400 cows or more is now a 1 person job, all thanks to IT.

If you have read this far you are probably wondering where I am going with all this, sorry for the long rambling journey! I guess what I am really trying to say is that IT matters so much that it doesn't matter.

The point of all this is that IT is everywhere and in everything we consume. Every service that is managed, whether it is by a dedicated IT team or not, is enabled by, and dependent on, what we refer to as information technology. So, is it time to drop the IT from ITSM and tell the world that we are Service Managers, pure and simple?

Before I crossed over on to the 'dark side' and entered the world of IT, I was a journalist and  one of the first things that was drummed into us was to eliminate redundant words. The most common examples of this are things like 'totally unique' and  'absolutely perfect' - you cannot be more than unique or perfect, so totally and absolutely are redundant words. What I am suggesting is that IT is redundant in IT Service Management. To say a service uses IT is not necessary, because ALL services do. This opens far bigger and more exciting opportunities to spread the goodness of our service management frameworks and processes outside the hallowed halls of IT.

Try something - next time you are in a social situation and someone asks you what you do, instead of saying you are in IT, try saying you work in service management. Rather than getting that glazed look and hurried exit while they are saying to themselves "please don't start talking about computers, they scare me" you are likely to get a far more interested reaction, service management can be a conversation starter, rather than terminator! And who knows, it might be the start of a beautiful friendship!

Posted by Kirstie Magowan at 7:42 PM