We all know how the story goes...the fair maiden has been captured by the nasty ogre and imprisoned in a high tower in the middle of a dense jungle of unforgiving thorns. Only the bravest knight in the land can rescue her. He gallops in on his trusty steed, slashes the thorns with his shining sword, defeats the ogre with a single blow, scales the high tower and rescues the fair maiden. The kingdom rejoices, he is surely the only hero they will ever need, whenever they are in peril they simply call his name and their world will be right once more. 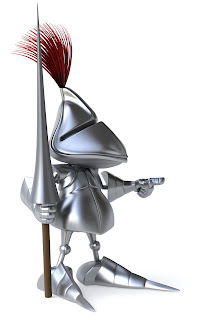 Have you ever met this gallant knight...perhaps you see him when you look in the mirror each morning!

The IT industry abounds with such heroes...don't you love the feeling when you save the day and the subjects of the kingdom (you might know them as customers and users) worship at you feet?

Sorry to break it to you, but as nice as that feeling is, this is a BAD thing! An environment that encourages heroes is an environment where information silos abound and knowledge management is a foreign language.

Being the hero can be intoxicating and that feeling is rather addictive! It feels so good to be needed...I talked to a database administrator one day who quite openly told me that he didn't document what he did to resolve calls, because if he did then he became replaceable, as long as he held all the knowledge between his ears his job was safe...he never considered the fact that he also couldn't be promoted. Funny thing is that I saw him today, around nine years since that conversation, he is still in the same job, at the same level and wonders why people are promoted around him and he is stuck in a time warp...I might have to take him out for a coffee one day and explain it to him!

Heroes cost the business, and those costs can be high. If the only person who knows how to resolve a recurring issue is away, what do you do? Call them in from holiday (and possibly have to pay penalty rates to get him there)? Get a third party specialist to come in and work out what has gone wrong ( and you know how much they are going to charge)? Get someone else in your team to start from scratch and reinvent the wheel? None of these are satisfactory scenarios, and all are going to cost...the first option simply reinforces the hero complex - "they just can't do without me!"

So how do you banish all the heroic knights from your kingdom? Very simply, get serious about knowledge management. If everybody either knows, or can find out, how to get things working again, then there is no place for the knight in shining armour.

Again, this is one of those ABC (Attitude, Behaviour and Culture) scenarios, the business has allowed the hero culture to grow over a period of time, and it is going to be no easy matter to change that. You have to somehow replace the good feeling that your heroes get from saving the day with something equally as intoxicating...something along the lines of treating a heroin addict with methadone!

You are going to need to devise rewards for information sharing and documentation...prizes for the best knowledge-base articles, get your heroes to run workshops for other IT team members - in this way they still get that feeling of being important, and perhaps a little superior! Tread carefully, these people are often your most valuable team members, and you certainly can't afford to lose them before they transfer that information!

So have you worked out if you have a hero complex? Check yourself against the following scenario.

Your phone rings at midnight - it's the oncall techie from work, there is an outage on a service that you manage -  do you:


So, pretty clear that if answer one sounds like you, you need some serious help with your addiction! If you are more in the number two category, you still need some help, but you are willing to share knowledge when you have to. If you fit into category three, congratulations...when and where can I hear your conference presentation?

Posted by Kirstie Magowan at 3:56 AM